America’s first enclosed shopping center opened in 1950 in Seattle followed by the Northland Center in Detroit in 1954. Jump to the present day and America has nearly 12,000 malls. Consider this: retail square feet per capita in the U.S. is more than six times that of Europe or Japan. What’s crazy is that more than one billion square feet of mall real estate could be vacant by 2022 because of the infamous retail apocalypse: nearly one third of malls  are in jeopardy and many have already fallen victim to the brick-and-mortar breakdown (we kid you not, there are reports of frogs spawning in abandoned water fountains).

However, Americans aren’t known for letting resources go to waste—in many cities developers are taking to revitalizing dead malls and turning them into thriving city centers—with  great success.

In Orlando, Florida, Winter Park Village (once an indoor mall) was repurposed with speciality retail on the first floor, residential lofts and offices above, and other features such as a grocery store, movie theater, fitness center and access to a beach-entry pool.

Another excellent example is also located in Florida. At CityPlace in West Palm Beach, famed artists and sound designers are painting murals and installing sound systems. “It’s all about driving different kinds of traffic to a project,” says Ken Himmel, the president and CEO of Related Urban. “Mixed-use retail developments centered on cultural offerings are outperforming every other type of retail offering by a long shot.”

Many organizations have use for large, empty buildings, such as hospitals and medical centers. Vanderbilt University Medical Center in Tennessee converted Nashville’s oldest indoor mall, 100 Oaks Mall, to expand by almost 440,000 square feet. While retail shops will remain on the first floor, the second and third floors were converted to outpatient clinics and offices.

“The most sustainable thing [underused malls] can become is urban suburban,” says Spencer Levy, head of research for the Americas at CBRE. When you can combine the feel of being in the city with the accessibility of the suburb, especially with a major city skyline in the background, you can start to develop something special. By providing a destination for people, such as plazas and courtyards with a wide variety of activities such as weekend concert series or a farmer’s market, you’ll gain a thriving scene favored by young people who prefer the city but enjoy easy access with many restaurants, shops and activities in a centralized area.

In New York, Chicago, Denver and many other major cities across the nation, retailers are turning empty mall space into giant showrooms to showcase their brands, allowing consumers to become immersed in their offerings without actually purchasing anything, save for food, or a wine tasting while listening to a local band—think mixed-use development.

The mall that many of us grew up with in the 70s, 80s and 90s—a place where bored teenagers went to play in the arcade or wander aimlessly through racks of clothes or meet up with friends—will become a distant memory. Replaced instead by city centers filled with showrooms, concert venues, gyms and restaurants—not to mention apartments and medical facilities. So, I guess it’s safe to say, the American mall isn’t dead, it’s just going through some major growing pains. 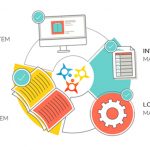