It was a dark and stormy afternoon on October 31. B-Stock’s San Francisco office was wrapping up its work to prepare for that evening’s company Halloween party. Similar activities were taking place in the Boston, Salt Lake City and Florida offices. Everyone at B-Stock loved Halloween: the costumes; the candy; the ancient tradition of scaring off evil spirits. It was all soon to be in full swing.

B-Stock’s CEO, Howard brought his smoked ribs to the party. The tech guys carried in the beverages. Jennifer organized the decorations. The marketing team made a fun video of past parties. The sales team invited clients. Customer service was thankful to get off the phones. The account managers tidied up their desks and went looking for the ping pong paddles. Everyone was ready for a good time. Just as the decorations were hung and everyone got in their costumes, there was a loud rumbling noise outside.

“What the heck is that?” shouted Jeremy. They all ran to the windows to look outside. Was it thunder? No. Was it a plane? No. It was a gigantic semi-truck pulling into the parking lot.

“Oh no. Not again,” sighed Howard as he remembered the last time someone thought B-Stock’s HQ was a warehouse return center. “Someone go out there and tell them to turn around. We’ve got ribs to eat!” Reggie and Jon decided to go out and take a look. As they approached the truck, they noticed the engine was already off. They approached the cab, only to find the driver’s side door ajar. Feeling curious, they poked their heads into the cab, only to find it empty. The driver was not to be found. Quickly scanning the immediate area, they found no trace of where the driver ran off to. The two looked at each other and shrugged their shoulders.

“What do you think is inside the truck,” asked Jon.

“Only one way to find out,” replied Reggie. So they found the keys, walked around to the back, and opened it up. Inside they found rows of brown boxes stacked high and deep. Grabbing one of the boxes, Reggie opened it up and found Halloween supplies! By now the rest of the office had gathered outside to see what was going on. One by one, they each grabbed a box and opened it up. To their dismay, they realized they had a full truckload of mixed lot items! What a nightmare! Mixed in with the costumes and the decorations were blenders, headphones, an entire box of used mobile phones, and even a few pieces of luggage.

Steve, who was visiting from Boston said, “We need to separate this merchandise and lot it by item type.”

The whole team groaned and replied in unison, “Who’s going to do that?”

That’s when Jen suggested, “Let’s hire someone. We’re all overworked and we need a specialist for this.”

“Do you know how hard it is to hire someone in the Valley these days?,” answered Sierra, who already had her LinkedIN account open with four possible candidates to review.

That’s when Mike said, “I’m thirsty. I think I saw some Pumpkin IPA in the fridge.” And with that the team went back inside for further discussion. At this point, the sun had sunk, clouds had gathered, the temperature dropped and for some reason a werewolf howled in the background (although that might have been the spooky Halloween music Kate and Rajvi started playing). At the sound of the werewolf, Colleen was inspired to tell ghost stories she had heard on the Lore podcast as Melissa opened a bottle of chardonnay.

As the party commenced, and Vanessa passed around homemade cupcakes, no one noticed what was taking place outside…except for Kush, who notices and responds to everything with accurate precision. “Guys, look what’s going on outside.” Once again the staff gathered around the windows. This time, instead of seeing a full truck, they saw all of the returned and excess Halloween items and the boxes of blenders and everything else neatly organized and separated into category-specific lots.

Austin could have sworn he saw one of the ghost costumes floating through the air, and Long thought he saw a skeleton costume picking up a box (and Ivaylo knew for certain that he saw a witch’s costume directing the ghost and skeleton).

“Looks like that witch has everything up and running,” said Ivaylo. And Maria commented on how each lot fit a specific buyer profile.

With that, they all stood and stared as three quarter-sized trucks pulled into the parking lot. It was dark, and the headlights were bright, so again, no drivers could be seen, but each of the three trucks parked in parallel and their back doors swung open. In shocked disbelief, the staff watched the organized boxes all float up off the ground and stack themselves neatly in the smaller trucks. The larger, first truck had completely vanished without a trace. After the trucks were loaded, they drove off into the night. The team all looked at each other stunned as to what just happened. That’s when Howard’s phone notified him of an incoming email.

Howard read the email to the team, “Halloween liquidation recovery program a complete success. Recovery rates jumped 155%. Thank you B-Stock for another great year. Signed, the Witch, the Ghost and the Skeleton.” 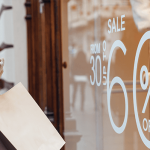