Technology is changing quicker than ever before; what might have passed for a novelty a few years ago, could be the key to future success. Take for example 3D printing: a few years ago 3D printers were extremely expensive, not that accurate, and had limited potential. Now, 3D printers can do much more, including building small parts for entire products in a single step. According to Supply Chain Dive, here are the newest technologies that retailers are looking to implement over the next five years.

Many companies still rely on their own servers to secure sensitive data. This is no longer practical nor cost efficient. While over 50% of the surveyed companies are already using cloud storage and processing, that number will be closer to 100% within five years.

After placing data in the cloud, companies will need to optimize it for best use. Tracking inventory will only become more challenging as online sales and returns continue to increase and optimizing shipping, processing, and warehousing will take on an even bigger role as it does today. In addition, predictive analysis will take a larger role by using stored data to anticipate problems and improve forecasting.

When it comes to sensors and auto detection, RFID tags are all the rage. These tags can automate certain processes and can add SKU-level visibility. RFID tags are even used to help track pallets.

Some might argue that the Internet of Things (IoT) should be higher on this list; especially when it comes to the secondary retail market. It’s well known that the average consumer electronic device will be owned and used by two to three different people in its lifetime. It’s of paramount importance that retailers adopt data wiping around their IoT merchandise. On the supply side of things, IoT will vastly improve communication between connected equipment and systems.

This is the cool part of tech that could turn scary (for example, Terminator…). No one is predicting that a robotic forklift will one day try and take over the world, but what about that robotic driver behind the wheel? All jokes aside, over 70% of respondents say they plan to implement ordinary equipment into self-operating machines within 5 years.

Wearable tech has been around for longer than most people might think, but smart watches are gaining popularity, particularly in the fitness category. In terms of retail and supply chain, the big idea is focused on industrial smart glasses, gloves, or other clothing items that can help boost worker productivity at a time of labor shortages and can shorten training times.

It wouldn’t be an article on future tech without mentioning blockchain. For retailers and supply chain experts, 53% of survey respondents say that blockchain is on their roadmap. Currently, the idea is to use blockchain to record transactions and assure integrity.  “It’s in its infancy,” said MHI CEO George Prest. “Everybody is still trying to really figure out what blockchain is all about.”

The U.S. is experiencing a shortage in truck drivers, which could be alleviated by the increased use of driverless vehicles and drones. Fifty percent of respondents replied that drones and automated vehicles are in their future plans; they just need to figure out some remaining safety issues.

As mentioned at the start of this article, 3D printing remains on the scene and will continue to increase in popularity by helping retailers create new parts in a quick and efficient manner.

Artificial Intelligence is one of those vague technologies that continues to get headlines along with blockchain. AI tech is woven into other technologies, such as wearable devices; but first, there are regulatory obstacles to remove before AI will take on a life of its own… (have you been watching Westworld?) 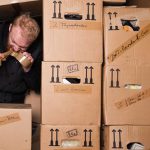 Getting Out From Under All Those Ecommerce Returns June 1, 2018 AIIoTsupply chain

Apple released four new iPhone models in 2020. Historically, the annual iPhone release happens in late September, but given the impact of COVID-19 on the supply chain in 2020, new models hit the primary market in two waves, the first…